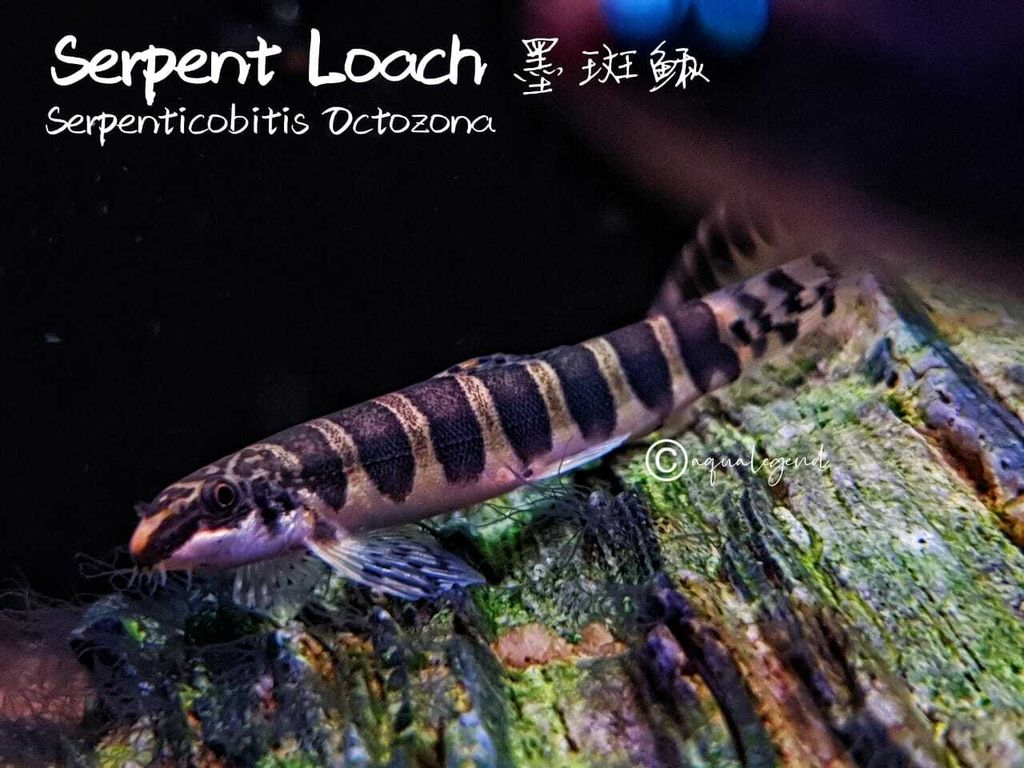 The Serpent Loach (Serpenticobitis octozona), is a nano-sized member of the loach/botia family indigenous to Laos.  It is an exceptionally active and visually attractive species that is generally peaceful, especially when kept in groups of 6-8 or more in an amply-sized aquarium with plenty of cover and decor. Its small size also makes it ideal for the planted aquarium, where it will diligently seek out microinvertebrates and "pest snails" as prey, keeping nearly all of the planted tank "pest invertebrates" at bay or even on-existent.

The Serpent Loach is an omnivorous micropredator requiring a diet of meaty foods regularly supplemented with vegetable and possibly even a small amount of fruit matter.  It will often accept high quality dry foods, but its diet should also include regular offerings of live/frozen meaty foods of invertebrate origin. This loach is native to shallow, oxygen rich waters that include terrain covered in biofilm and algae, so it also requires a supplementary amount of vegetable matter.

The aquarium of the Serpent Loach should include plenty of rockwork and driftwood. It also must include oxygen-rich water and significant areas of high water flow. This fish can even be a prime candidate for river tank setups and can cohabitate nicely with hillstream loaches and Stiphodon gobies as well as other inhabitants of such turbulent waterways. It lives in areas of little plant foliage, but it will be completely at home in a heavily planted tank as long as oxygenation and water flow are consistently high. Plenty of cover is necessary for this species and will ensure the most activity, best coloration, and least stress. The Serpent Loach is an exceptionally active species that also needs plenty of clear room in the aquarium for swimming and exploring. It exhibits a very sophisticated schooling behavior and social hierarchy where each individual species constantly strives to be the “leader of the school” by swimming to the front of the group. While this behavior may seem aggressive, it generally involves no real fighting and results in an exceptional level of activity. As long as the school includes at least 6-8 specimens, aggression or bullying within the school will be minimal or nonexistent. However, if the Serpent Loach is kept solitarily or in too small of a group, it can become withdrawn or aggressive.

The Serpent Loach will thrive in a planted aquarium with very clean, well-maintained, high-oxygen water of moderate to high water flow and is generally peaceful with other species of fish, although its boisterous nature can be stressful to other exceptionally passive fish in smaller tanks. It is an excellent tankmate for most rasboras, tetras, danios, livebearers, and other schooling fish and larger invertebrates (such as Amano Shrimp, Bamboo and Green Lace Shrimp, Vampire Shrimp) that inhabit the middle and upper levels of the water column. In a spacious tank, it can also be kept with other bottom-dwelling fish that are not too timid to be outcompeted at feeding time. The Serpent Loach, like most typical loaches, often preys on tiny worms, shrimp, and snails. This is very useful in helping reduce “pest snails,” but must also be considered with ornamental snails and shrimp. While the Serpent Loach is not likely to directly prey on larger Mystery, Nerite, Trapdoor, and other snails, it may incessantly harass them in a smaller tank. This can cause extreme stress and starvation in the harassed snails over time. Please exercise care and observation if you are considering keeping the Serpent Loach with ornamental snails or shrimp.

DIDN'T recommend keeping this fish with dwarf shrimp, and we recommend caution in keeping it with larger shrimp in a smaller tank.